Obituary for Richard A. Lembo 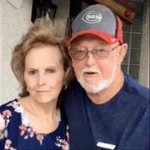 Richard A. Lembo 74 of Ft. Gay, WV; went home to be with the Lord on Thursday, January 16, 2020 at Three Rivers Medical Center in Louisa, KY. He was born on December 11, 1945 in Waynesboro, VA; he was a son of the late Anthony and Ruth Lembo. He was a carpenter and Mechanic by trade and of the Presbyterian Faith.
Richard is survived by his fiance’, Wanda Lotus Marcum of 8 years as well as son, Michael Anthony Lembo of Germany and daughter, Sonya Lembo Dewhurst of Waynesboro, VA as well as 4 grandchildren. He is also survived by his close friends, Sheila (Wayne) Williamson, Kathy (Ron) Spaulding, and Michelle Messer and their grandchildren.
Visitation will be from 11-1pm at the funeral home with services being conducted at 1pm on Monday, January 20, 2020 with Joe Mullins and Wayne Williamson officiating. Burial will follow at a later date. Mullins Family Funeral Home is honored and privileged to be serving the family of Richard A. Lembo.