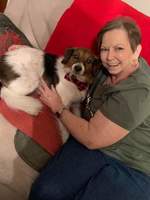 Note: Some of the words in this obituary was taken from the song, “Well Done.” From the time Margaret heard this song, she felt like the Lord was speaking to her; directly to her heart.

Margaret Ann Brumfield Damron left this world on her one-way flight to Heaven on July 6, 2020. She ran her race and is now at home. Her pain and worries of this world have faded away. She has waited her whole life to hear the Lord say, “Well Done, My good and faithful one.” Margaret has now been welcomed into the place where she belongs.

Margaret was born in Kermit, WV on July 25, 1954 to the late Keither and Lillian Margaret Parsley Brumfield. She faithfully attended the Lighthouse Community Church and was a retired Social Worker for the state of WV. She was preceded in death by her dear and beloved husband, Elias (Bug) Damron; sister, Judy Messer; brothers: Robert Lee and Carl Brumfield; great niece, Kelsey Marie Wimbish; Father in law and mother in law, Aaron and Ellen Damron; sister-in-law, Geraldine Messer, as well as fur babies: Casey, Rosie, Abby, and Toby.

Margaret is survived by her precious son, Bradley Elias Damron and his amazing wife, Kelley of Danville, WV. Brad was the pride of her life and she felt honored to have been chosen to be his mother. He and Kelley were adored and loved beyond measure and her love will carry on through eternity. Margaret was also mom to her fur baby, Buster, who has been her loving, loyal, and spoiled companion; who has brought so much happiness to her life.

She is also survived by her brothers; Keith (Stella) Brumfield, Danny (Amanda) Jude; Sisters: Loraine (Mike) Wimbish, Ruth (Roger) Newsome; sister-in-laws: Brenda Brumfield, Helen Brumfield, Kathy (Danny) Maynard, Wilma (Rodger) Lovins, Bettie (George) Maynard. Brother-in-laws: Aaron (Vickie) Damron, Clinton Messer, and Donald Gene Messer. She is survived by nieces and nephews whom she loved dearly and held them close to her heart. Margaret is also survived by Elizabeth Williams, who has made her home with Margaret for the past few years. God placed Elizabeth in Margaret’s life when she needed her most and Margaret felt blessed to have her and loved her dearly.

Visitation will be after 5pm Wednesday at the Lighthouse Community Church of Kermit, WV with special services at 7pm. Funeral services will be on Thursday, July 9, 2020 at 12:00pm at the church with Keith Brumfield, Lonnie Smith, and Bobby Perry officiating. Burial will follow in the Brewer Cemetery of Kermit, WV. Mullins Family Funeral Home is honored and privileged to be serving the family of Margaret Ann Brumfield Damron. The family has stated that it will be mandatory to wear a face mask.