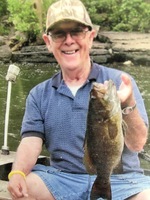 John Columbus Brewer 83 of Beauty, Ky, passed away on Friday, May 16, 2020 at the Martin County Health Care Facility in Inez, KY. He was the son of the late Jesse and Pricy Brewer. He was preceded in death by his 3 brothers, Jesse Brewer Jr., Arnold (A.J.) Brewer, and Henry (Delno) Brewer as well as 2 sisters, Gladys Whitt and Zelda Hensley.
John is survived by his wife of 59 years, Dimple Brewer, daughter, Denise and son in law, Larry Howell of Lovely, KY, two very special grandsons, Chad Howell of Van Lear, KY and Ryan Howell of Prestonsburg, KY and 2 great grandsons, Lyric and Wyatt Howell. John also leaves behind one sister, Betty Booth of Nicholsville, KY as well as a host of special nephews, nieces, and friends that will miss him dearly.
John was a veteran of U.S. Navy and a retired barber. He enjoyed fishing but most of all he was a devoted husband, father, and grandfather.
Private graveside services will be held for the family in accordance with the orders set forth by Governor Andy Beshear, Kentucky Funeral Directors Association, and Center for Disease Control. Mullins Family Funeral Home is honored and privileged to be serving the family of John Columbus Brewer.