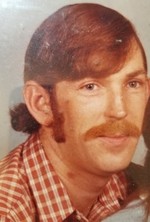 Hubert Junior “Bug” Marcum, 64, of Vinton, OH was born on December 15, 1955 to the late Hubert and Bernice Brewer Marcum in Williamson, WV. He is preceded in death by his son, Scottie Marcum, 3 brothers, Daney, Roger, and Randy Marcum, and one sister, Carol Marum.
Hubert Jr. leaves behind a son, Hubert “Herbie” Marcum, 3 brothers, Chester (Carol) Marcum of Columbus, OH, Kenneth Marcum of Fallsburg, KY, Ricky Marcum of Crum, WV, as well as 5 sisters, Dollie (Robert) Marcum of Crum, WV, Amanda Marcum of Fallsburg, KY, Wanda Marcum of Crum, WV, Tina (Wendell) Williams of Warfield, KY and Judy (Sherman) Holland of Ft. Gay, WV and several nieces and nephews.
At the request of the family he will be cremated and a memorial service will be conducted at a later date. Interment will be done at a later date by the family at the Anderson Cemetery of Jennies Creek, WV. Mullins Family Funeral Home is honored and privileged to be serving the family of Hubert Junior Marcum.