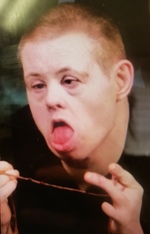 On Sunday, November 17, 2019, Carl Leslie Marcum, a loving son, brother, and uncle went home to be with our precious Lord and Savior at the age of 61. Carl was born on March 14, 1958 in Williamson, WV; to his loving parents, Joe and Mae Marcum. Carl was such a special person. Even though he never spoke a word, his smile captured the hearts of all who knew and loved him.
Carl was preceded in death by his father, Joe Marcum, two brothers, Paul and Joe Marcum.
He is survived by his loving mother, Mae Marcum, brothers, Eugene (Barbara) Marcum, Lewis (Margaret) Marcum, and Lyle (Patty) Marcum all of Kermit, WV as well as his sisters, Ruth (Bruce) Smith of Kermit, WV, Tennie (John) Lawrence of Nitro, WV, Darlene (Jerry) Messer of Kermit, WV, and Georgia Evenhouse of Michigan and a host of nieces and nephews.
Funeral services will be conducted on Wednesday, November 20, 2019 at 12:00pm at the Mullins Family Funeral Home with Eugene Marcum and John David Messer officiating. Burial will follow in the Brewer-Fitzpatrick Cemetery of Marrowbone, WV. Visitation will be from 5-9pm on Tuesday at the funeral home. Mullins Family Funeral Home is honored and privileged to be serving the family of Carl Leslie Marcum.